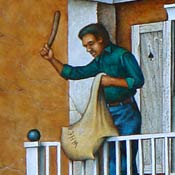 If you hit the sack or alternatively hit the hay, it means you go to bed.

Before the invention of the modern mattresses, they sued to be sacks filled with hay. They where basically a suck of hay you laid upon.

In books written by Laura Ingalls Wilder, such as Little House on the Prairie, they slept on “straw ticks.” It was basically a mattress full of hay or straw. She wrote that it was prickly, and uncomfortable if the hay was uneven.

It’s past midnight so it’s time we hit the sack.

We also get another familiar phrase from this practice, “Don’t let the bed bugs bite.” As you can imagine, straw and hay contained numerous bugs which would bit the person as they lay sleeping.

An inhibition, a neurotic reaction to some life situation. The girl has a serious hang-up about the... Read more →

A delay in some process. There was a hang-up in the construction of the office tower because of the... Read more →