Home • C • Cat got your tongue

Cat got your tongue 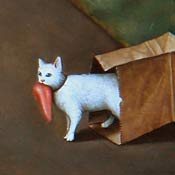 “Has the cat got your tongue?” is an expression in the form of a question that originated in the mid-nineteenth century and was used when addressing a child who refused to answer a parent’s questions after some mischief. It is often shortened to “cat got your tongue?”. It means that you are having trouble thinking of a way to speak and/or answer a question that has been posed to you, so it seems like you cannot talk. When someone says or asks “cat has your tongue,” it technically means you are speechless, you can’t think of anything else to say.

Hi, Anna! How are you? How’s your Mom? Are you surprised to see me? What’s the matter, has the cat got your tongue?

You could also ask the person, “Cat got your tongue?” to start a conversation with them.

As of how the proverb came into being, there are several theories trying to give an answer to that:

1 – The saying comes from the Middle East, where as punishment, liars had their tongues ripped out and fed to the king’s cats.

2 – Fear of a whipping with a cat-o’-nine-tails, or “cat” for short, could paralyze a victim into silence.

3  – The expression comes from the Middle Ages when witches were greatly feared and often put to death. It was believed that if you saw a witch, her cat would somehow “steal” or control your tongue so you couldn’t report the sighting.

4  – There’s no particular logic to ‘cat got your tongue,’ except that cats have served as the object of human myth and metaphor for thousands of years. — Evan Morris of Word Detective.

However, the earliest written form of the expression can be traced back to the Oxford English Dictionary of 1911.

Get the ball rolling

To start something; especially something of big importance. We explained to the web developer how... Read more →

Get it off your chest

We use this idiom to describe the relief we feel after we tell somebody a secret which is troubling... Read more →