He that Is warm, thinks all are so 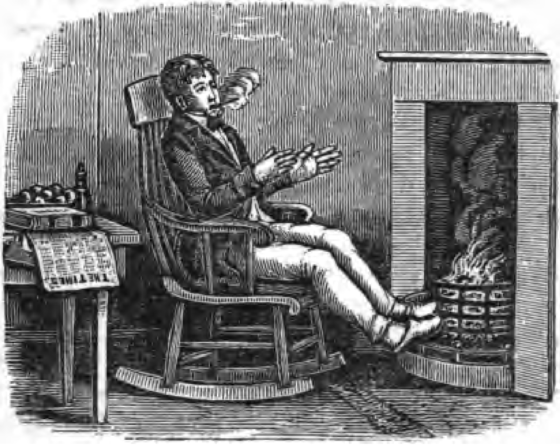 Before a glowing fire, with slippered feet,
The full fed man sits on his cushioned seat;
When warm and smoking, then it is he’s told
Of some poor people freezing with the cold;
He’s quite surprised, and says he cannot see,
Since he’s so warm, how such a thing can be.

We have here a representation of a man in quite comfortable circumstances. He has just eaten a full meal of “fish, flesh and fowl,” and has now taken an easy position by the fire, and is indulging himself in the luxury of smoking. He has had enough to eat himself, and considering the abundance which he has seen, finds it difficult to believe that there is so much suffering on account of hunger. He is quite warm and comfortable himself, he feels no inconvenience on account of the wintry atmosphere without, and thinks perhaps that the stories of persons freezing with the cold, he sees in the newspapers, must be exaggerated.

The cause of the neglect of others arises from selfishness. In very many cases where we do know of the sufferings of our neighbors, it is because we do not wish to know. It is because we are too much governed by our personal feelings, rather than from fixed principles of right and wrong. Hence, it is sometimes good for a man to be afflicted : he will be taught by experience what affliction is, and thus lead him to relieve the sufferings of others. Many persons who have been in abject circumstances, have afterwards been remarkable for their generosity in relieving the distresses of others. The amount which is raised for benevolent objects, is more generally given by the middle and poorer classes of society, who know and have felt the value of money, than from those of high rank and wealth who have never been in want.

An illustration of our proverb is shown in the story of a rich lady, who ordered her servant to make a fire in one of her rooms. While it was kindling, and the room was still very cold, she thought the poor people in the parish must suffer much in such a bitter cold morning. “John,” says she to her servant, “make haste and carry poor old Mr. A. a large basket of coal, another to Mrs. B., and one to widow C.; also look up some clothing for their poor children.” The servant went to obey her instructions, meanwhile the room got warm, and the lady more comfortable. “John,” says she, “you need not take that coal and clothing to those poor persons just at present, the weather is moderating, and it is beginning to be quite comfortable, wait till the weather is more severe, the coal will do them more good then, than at this time.”

On other subjects, besides the one that has been mentioned, men exhibit the truth of the proverb. We find men full of politics, theories, inventions, and systems. They are deeply interested in the subject upon which they are engaged, and they are quite apt to think that others, to some extent at least, must feel the same. Indeed some are so full of their particular notions that they pour them out at all times and places, much to the annoyance of those who are not so warm on the subject as themselves. He must not be disappointed if he finds others cold and indifferent on subjects which he feels to be of the highest importance.

Every horse thinks its own pack heaviest

We all imagine that we have a greater load to carry than anybody else; that nobody works harder than... Read more →

Evil be to him who evil thinks

The French for this, Honi soit qui al y pense, is the motto of the Most Noble Order of the Garter,... Read more →